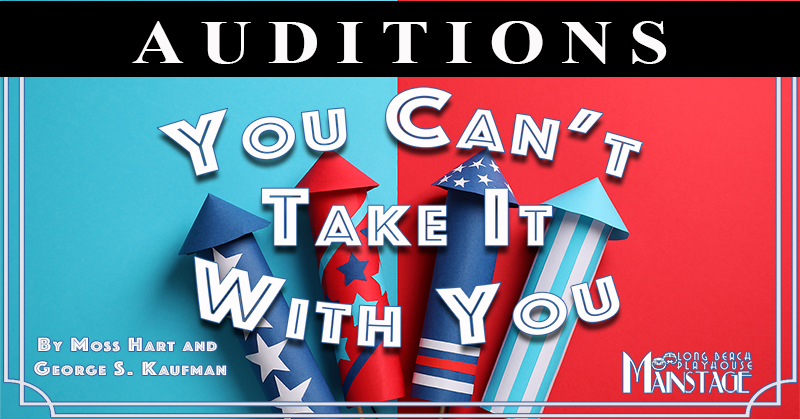 AUDITIONS: YOU CAN’T TAKE IT WITH YOU

TITLE: YOU CAN’T TAKE IT WITH YOU

At this time, all volunteers including actors must be fully vaccinated to participate in shows.

Sides for cold readings will be provided at the auditions.

Please bring your vaccination card as written proof of full vaccination to the auditions.

Masks will be required at the auditions.

You Can’t Take it With You introduces audiences to the freethinking Sycamore family and the mayhem that ensues when their daughter’s fiancé brings his conservative, strait-laced parents to dinner on the wrong night.  At first the Sycamores seem mad, but it is not long before we realize that if they are mad, the rest of the world is madder.

NOTE:  All ethnicities are encouraged to audition and will be considered for any role.

MARTIN VADERHOF (M, 70’s) – The patriarch of the household, Martin (aka Grandpa) is Penny’s father. “He is a man who made his peace with
the world a long, long time ago, and his whole attitude and manner are quietly persuasive of this.” Having given up his job 35 years ago to enjoy his life, he is happy attending circuses, commencement ceremonies, and collecting snakes.

PENELOPE SYCAMORE (F, Early 50’s) – Known as Penny, she is an avid, amateur playwright, and painter. And not too good. “Comfortable, gentle, homey… under that placid exterior there surges the Divine Urge.” She is the daughter of Martin, wife of Paul and mother of Essie and Alice.

ALICE SYCAMORE (F, early 20’s) – The younger child of Penny and Paul, “she seems to have escaped the mild tinge of insanity that pervades” the rest of her family. She is the only member of the household with steady employment out in “the real world.” Although well aware of their “quirks,” she loves and is truly devoted to her family.

TONY KIRBY (M, mid 20’s) – Mr. Anthony Kirby, Jr. is the Vice President of his father’s business, Kirby & Company, where Alice is his secretary. “Although he fits all the physical requirements of a boss’s son, his face has something in the idealist of it. All in all, a very nice young man.”

ESSIE CARMICHAEL (F, about 29) – Eldest child of Penny and Paul, and wife of Ed. “…curious air of the pixie about her.” She makes candies and studies ballet (endlessly and fruitlessly).

PAUL SYCAMORE (M, 50’s) – Paul is Penny’s husband, father of Essie and Alice. He spends most of  his time making fireworks in the basement with Mr. De Pinna. He also builds toy models.

MR. DE PINNA (M, 40-65) – Mr. De Pinna is a former ice deliveryman. About 8 years ago, he delivered ice to the house, and never left. Spends most of his time making fireworks with Paul.

RHEBA (F, 30’s) – The “maid,” Rheba is perhaps not the most competent of domestic workers. But, she fits in with this family to a tee.

DONALD (M, 30’s) – Rheba’s boyfriend. He is “on relief,” and therefore spends most of his time with Rheba and the family. He enjoys bringing flies for the snakes, and helping out around the house.

MR. ANTHONY KIRBY, SR. (M, late 50’s) – The president and founder of “Kirby & Company.” He is the epitome of the extremely wealthy and successful, self-made businessman. He raises orchids as a hobby.

MRS. MIRIAM KIRBY (F, 50’s) – A perfect match for her husband, Mrs. Kirby is the quintessential, high society matron. She has an avid interest in Spiritualism.

THE GRAND DUCHESS OLGA KATRINA (F, 60’s) – A Russian émigré, Olga is a waitress at Child’s Restaurant, Times Square. Her cousin was Nicholas II, Czar of Russia. (Will double as GAY WELLINGTON.)