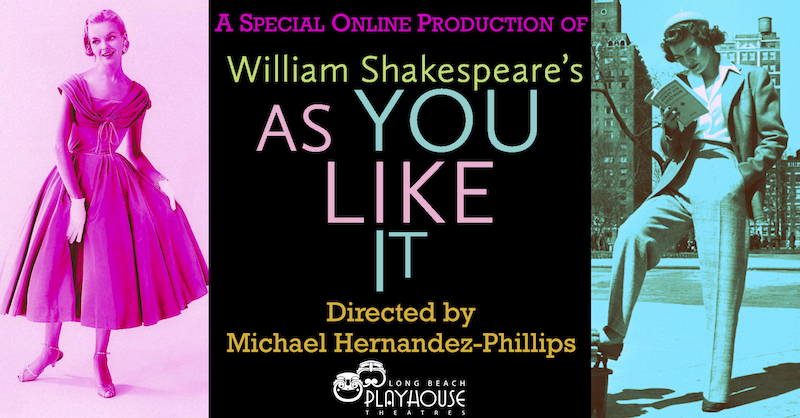 We are so Excited to bring you this special Online Production of William Shakespeare’s AS YOU LIKE IT!  This show was originally planned to be produced in this year’s 2020 Studio Season from Aug. 29 – Sept. 26.  When the pandemic hit and we couldn’t do live theater, we talked to the director of the show, Michael Hernandez-Phillips and asked if he could do an online version, and he eagerly said yes!

About the Play: In one of Shakespeare’s most delightful comedies, we are thrown into the depths of the Forest of Arden and introduced to Rosalind, Orlando, and a band of love-struck, eccentric characters as they engage in sibling rivalry, unrequited love, assassination plots, mistaken identity, gender confusion, and wrestling!  With Rosalind exiled from her home and navigating her way through the forest, this roller-coaster of emotions and errors will have you rooting for fools and pulling for redemption. With some of Shakespeare’s most memorable dialogue, As You Like It will allow you to escape the pressures of real life into the fantasy of romantic froth.

AS YOU LIKE IT Special Online Production – In Five Acts:

Special Interview with Director Michael Hernandez-Phillips on how AS YOU LIKE IT – The Online Production was created:

This is a Free Online Show, but if you liked any part of it, consider donating to the Playhouse so we can thrive in this time when we can’t do live theater!

IF YOU LIKED THE SHOW, DONATE HERE!