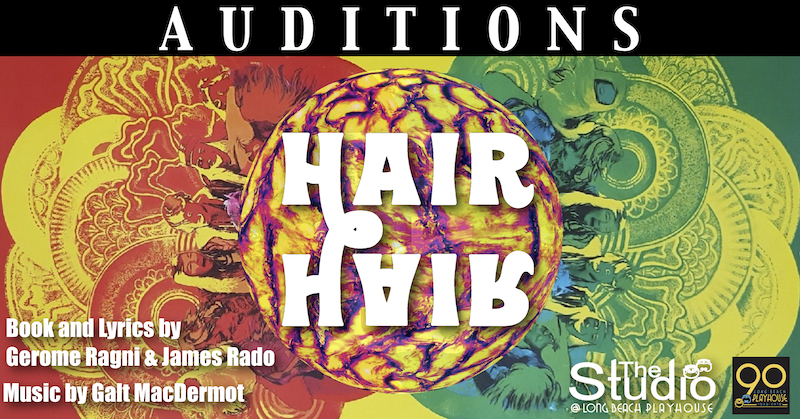 Aug. 5 to Aug. 7, 2019
Music by Galt MacDermot, Lyrics and Book by Gerome Ragni and James Rado

Must be 18 or older to audition.  Some roles will require nudity; for other roles, the nudity will be optional.

Bring headshot and resume. Please be familiar with the show.

At the Open Call – please prepare 16 bars of a Rock, R&B or Contemporary Musical Theater song in the style of the show

At the Callbacks – Scene sides will be read, improv exercises will be played, songs from the show will be learned and a dance callback will be seen.

All nudity during the show, rehearsals, and auditions will be handled under strict guidelines.  Please take note that while this is not an Equity production, we will be following guidelines taken from the Equity Rules.

At the Callbacks, the top 2 or 3 contenders for each role requiring nudity should be prepared to disrobe as part of the audition process. The purpose of this is to gauge your willingness to be nude for the role and your comfort level.

No Actor will be asked to disrobe at the Callbacks, in whole or in part, until after they have been auditioned as an Actor.

No Actor will be asked to disrobe if they have indicated that they are not willing to perform nude on their audition form.

A full list of guidelines for nudity at callbacks and rehearsals will be posted in the actor waiting area.

Hair: The American Tribal Love-Rock Musical follows a group of hippies fighting the establishment, dodging the drafts, getting high, living and loving in New York City. It’s 1967: the Vietnam War raging and the Age of Aquarius is dawning. Claude, his best friend Berger, their roommate Sheila, and their Tribe of friends struggle to balance the demands of the harsh and violent world with their dream for a more beautiful and peaceful world. When Claude receives his draft notice, he must decide whether to join his friends in resisting the draft, or bow to the pressures of society and his conservative parents, thereby sacrificing his ideals and, possibly, his life. Hair was a sensation when it premiered in 1967, as it brought the counterculture movement into the theatre and the national spotlight. The issues the show brings up – alienation, civil disobedience, youthful defiance – continue to timelessly resonate today.

All ethnicities are encouraged to audition.

GEORGE BERGER (M, Rock Baritone/Tenor) A social activist recently banished from high school. An unrestrained animal. He knows what is right and sticks to it no matter the consequence. The leader of the tribe. High energy, athletic, wild. Strong presence and is looked up to. Strong improv skills preferred. (NUDITY REQUIRED)

CLAUDE (M, Rock Baritone/Tenor) The most beautiful beast in the forest. Smart, attractive male with a playful side; a lover of life and the picture of a young man next door of the 60’s. Strong actor. Berger’s best friend, recently drafted, whose only possession, other than his freedom, is his hair. A charismatic leader that women adore, boys emulate, and men follow into the breach. A man of conscience who struggles with the conflict of what his heart tells him is right and what the authorities around him lead him to believe. Strong improv skills preferred.

SHEILA (F, Rock Alto/Belter) A second semester student and passionate protester from NYU who lives with Berger and Claude, aspires to spread love, loves Berger, but having Claude’s baby. The most intelligent of the tribe. Wants to change society through peaceful protest. Must have a strong voice and presence. Strong improv skills a plus. (NUDITY REQUIRED)

JEANIE (F, Alto) A follower, not a leader. Incredibly sweet, understands Claude better than anyone. Wise, passionate, creative woman, who is pregnant with the tribe’s baby. She has taken every drug, and takes care of the tribe. Strong actress to play comedic and dramatic scenes. Strong improv skills preferred.

HUD (M, African American Soul/Rock Baritone/Tenor) Speaks his mind and hopes you can keep up with him. High energy, spiritual performer with a strong voice and presence.  A true tone setter that is a natural on stage in any situation. Strong improv skills a plus. (NUDITY REQUIRED)

WOOF (M, Rock Baritone) May not want to admit it, but he is gay. A young animal. High energy, versatile performer. Must be a natural with comedy. Looks up to Berger and Mick Jagger…in many ways. Strong improv skills a plus. (NUDITY REQUIRED)

THE TRIBE (M & F, various vocal ranges.)  This is not a “chorus”, as the entire cast is a true ensemble. Tribe members sing many featured songs and play many roles in the show including MOTHER/FATHER, TOURIST COUPLE, historical figures, and more. Energetic, creative performers with heart and passion. Strong improv skills a plus. (NUDITY IS OPTIONAL FOR THE TRIBE)

JOIN OUR FACEBACK EVENT FOR AUDITION UPDATES AND TO LET US KNOW YOU’RE COMING!