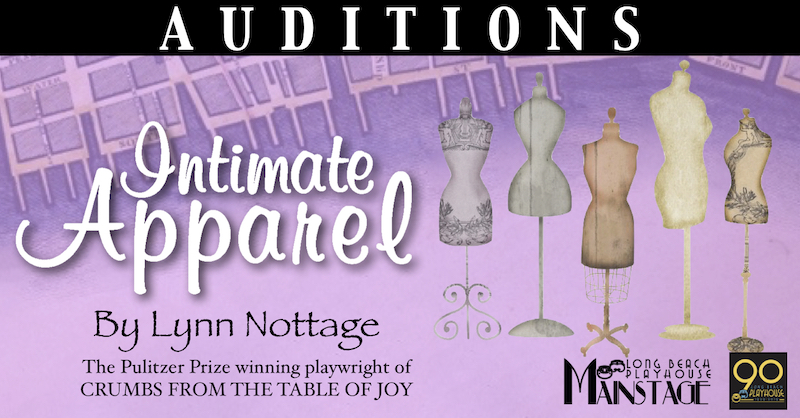 Due to the Corona Virus and the uncertainly of any plans in the near future, we will be postponing the auditions for INTIMATE APPAREL to a later date.  We will let people know the new dates when events are more certain, but right now, it will likely be later in the year.

Thank you for your understanding!

Sides will be provided for Callback

The time is 1905, the place New York City, where Esther, a black seamstress, lives in a boarding house for women and sews intimate apparel for clients who range from wealthy white patrons to prostitutes. She has managed to stuff a goodly sum of money into her quilt over the years. Her plan is to find the right man and use the money she’s saved to open a beauty parlor. She begins to receive beautiful letters from a lonesome Barbadian man named George who is working on the Panama Canal. Esther’s heart seems to lie with the Orthodox Jewish shopkeeper from whom she buys cloth, and his heart with her, but the impossibility of the match is obvious to them both, and Esther consents to marry George. When George arrives in New York, however, he turns out not to be the man his letters painted him to be, and he absconds with Esther’s savings. Esther returns to the boarding house determined to use her gifted hands and her sewing machine to refashion her dreams.

ESTHER (African American, F, 35) The protagonist of the play; a black seamstress in New York who sews intimate apparel for ladies of all levels of society. She is described by herself and others as being a plain and unattractive woman. (This role requires intimate contact.)

MAYME (African American, F,  25-45) A black sex worker. Though Esther disapproves of Mayme’s line of work, the two are close. Mayme initially moved to New York in the hope of playing ragtime piano in fancy clubs in Europe. (This role requires intimate contact.)

MR. MARKS (Romanian Jew, 25-45) A fabric seller who likely immigrated to the U.S. sometime in the last ten years. Mr. Marks is a bright and passionate man; he loves beautiful fabrics and the stories he learns about them. Eastern European  Accent Required.

MRS. DICKSON (African American, F, 35-50) The woman who owns the boardinghouse where Esther lives. Mrs. Dickson is proper and well to do.