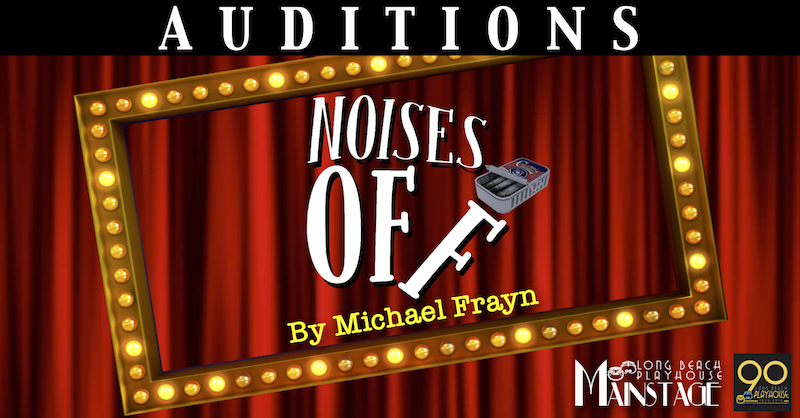 Bring headshot and resume. Cold readings from the script. Prepare a short physical comedy gag to perform at the audition (only do as much as you can do safely).

The first act of a farce entitled Nothing On is rehearsed and performed by a cast of somewhat ill-equipped actors (and techies), first during a final rehearsal and, subsequently, at two performances during the run (once letting the audience in to the mayhem occurring backstage).  This farce within a farce requires breakneck timing, daring courage, and strong physical comedy abilities.

NOTE:  All roles are open to all ethnicities

DOTTY OTLEY  (F, 50s-60s) The producer of the show and the woman playing the comic lead, Mrs. Clackett, the housekeeper.  Not as secure on stage as she was in her prime, but still a fierce performer.  (Able to switch between an American and Cockney accent.)

LLOYD DALLAS (M, 40s-60s) The director of Nothing On, dealing with a play that is plagued with difficulties, while trying to move on to his artistic project of directing Richard III.  (May have British or American accent.)

GARRY LEJEUNE (M, Late 20s-Early 40s) Leading actor playing Roger Tramplemain, the philandering Real Estate agent.  Pictures himself as a strong leader, but is unable to intelligently complete a sentence.  (Able to switch between an American and British accent.)

BROOK ASHTON (F, 20s) A beautiful, but frightfully inexperienced young actress.  Must be comfortable performing most of the play in her underwear.  Having a secret relationship with Lloyd.  (Able to switch between an American and British accent.)

POPPY NORTON-TAYLOR (F, 20s-30s) The problem-solving Assistant Stage Manager, also having a secret relationship with Lloyd.  She understudies the female roles in Nothing On.  (Must have strong Cockney accent.)

FREDERICK FELLOWES (M, 30s-50s) An extremely good-looking and nice leading man, who plays Philip Brent, the owner of the estate in Nothing On.  Always willing to take the blame or smooth over a problem, usually to the detriment of everyone.  (Able to switch between an American and British accent.)

BELINDA BLAIR (Female, 30s-50s) Attractive leading lady type, who plays Flavia Brent, Philips well-to-do trophy wife.  She’s the one in the cast one goes to for the dirty secrets.  She knows them all.  Will do anything to keep the show afloat.  (Able to switch between an American and British accent.)

TIM ALLGOOD (M, 20s) Stage manager for Nothing On.  He also does EVERYTHING that needed for the theatre, hence usually accomplishing nothing.  He is the understudy for all male roles in Nothing On.  (Must have strong Cockney accent.)

SELSDON MOWBRAY (M, 60s-Death) Formerly a brilliant stage actor, who’s career has hit the skids because of poor life choices, he is now playing the smallest role in Nothing On – The Burglar.  (Able to switch between an American and Cockney accent.)