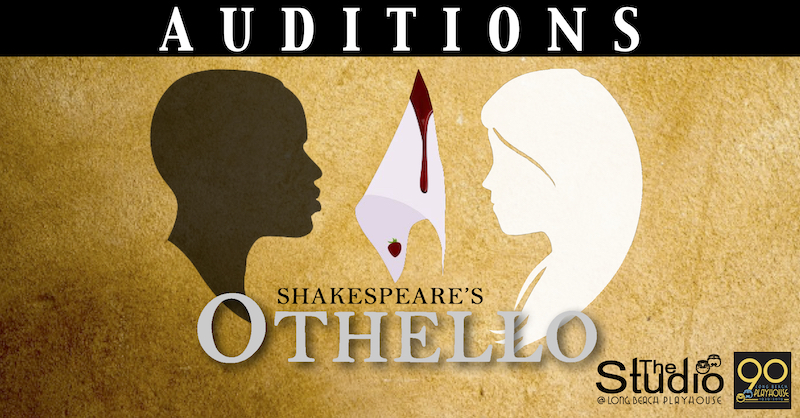 Regular Rehearsals: Monday – Thursday nights from 7pm – 10pm, with select Saturdays from 10am – 4pm, and one Sunday evening rehearsal.

Bring headshot and resume. Please prepare a monologue side from the show from the sides available on our website or Facebook Audition event.

Iago, a soldier full of hatred for Othello, devises a plan to bring his commander to ruin. He convinces Othello that his beloved Desdemona has been unfaithful to him. Iago carefully ensnares his fellow soldiers and citizens including the lieutenant Cassio, the wealthy Rodrigo, the young Bianca, and his own wife, Emilia. Set in a 1960s world with parallels to our own, the destructive power of jealousy and mistrust for the “other” in a time of civil change will ultimately lead to violence for those touched by hate.

Note: Ages listed are perceived age, Actors of any age that can play this range may audition.

OTHELLO (M, to play 30-40, Black/African descent) A general with a commanding presence and extreme self-control. A man that worked his way up through the ranks through discipline and force of will, a force of nature both feared and respected.  Newly married, he is still learning how vulnerable his heart is. Some stage combat experience preferred.

IAGO (M, to play 30-40, White/European descent) Othello’s assistant and trusted advisor, a working-class professional soldier. Despises Othello and devises a plot to destroy him. Intelligent but lacking education, he is charming and jovial, inherently trustworthy to those around him as he feels like the salt of the earth. Some stage combat experience preferred.

CASSIO (M, to play 25-35, All Ethnicities) Othello’s lieutenant and friend, Cassio is a career solider from the upper class. He dreams of honor and holds his reputation above everything else. He is earnest and honest, and yet beneath the façade of handsome young gentleman he has a problem with alcohol and a violent temper when provoked. Some stage combat experience preferred.

RODERIGO (Female identifying or Non-Binary, any age, All Ethnicities) Desperately in love with Desdemona, their desire to be with her makes them the first target of Iago’s manipulative scheme. Wealthy and unused to physical violence or living a rough life away from home.

DESDEMONA (F, to play 20-30, White/European descent) A strong, opinionated woman who chooses love in defiance of all obstacles. She is sweet, loving, and flirtatious but beneath that she pursues what she wants with passion and wit. Some stage combat and singing.

EMILIA (F, to play 25-35, All Ethnicities) Strong, witty, confidante to Desdemona and wife to Iago. While opinionated, she continues to act out of love for Iago, bending her ethics and morals to make him happy even as she doubts his motivations. (will also play Servant)

BIANCA (F, any age, All Ethnicities) A confident and out-spoken native to the island where the Venetian soldiers are stationed. In love with Cassio and eager to do whatever pleases him, even as she realizes he does not return her affection the same way.  (will also play Messenger)

BRABANTIO (M or F, to play 50-65, White/European descent) Wealthy and part of the upper class, narrow minded and stubborn. Expects their daughter Desdemona to obediently follow the established order and obey their parent. (will also play Soldier)

DUKE OF VENICE; CLOWN (M or F, any age, White/European descent) A fair-minded ruler of a strong country, eager to appease their citizens. Driven to make decisive military actions to keep the nearby smaller countries in check. (will also play Soldier)

MONTANO (M, to play 30-40, All Ethnicities) A native to the island where the Venetian soldiers are stationed. Some stage combat experience preferred. (will also play Officer)

LODOVICO (M or F, to play 20-30, All Ethnicities) Courteous and genteel, they take their role in business and government seriously. Cousin to Desdemona. (will also play Senator & Gentleman)

GRATIANO (M or F, to play 50-65, All Ethnicities) Friendly and straightforward, a member of the upper class and relative to Brabantio. (will also play Gentleman)