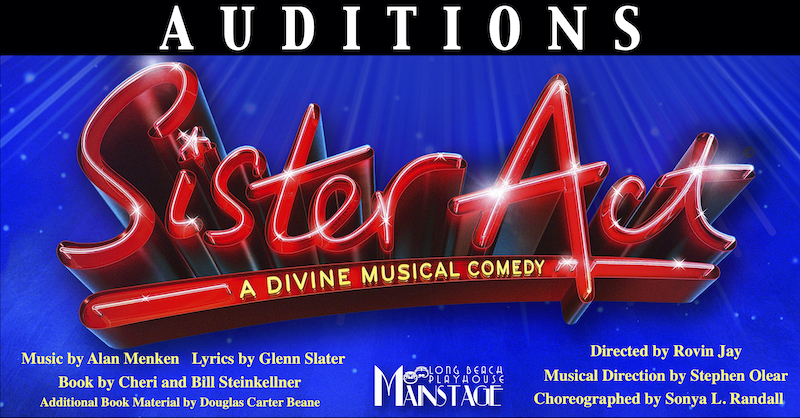 At this time, all volunteers including actors must be fully vaccinated to participate in shows.

Please be familiar with the show.

At the Open Call – please prepare 16 bars of a Musical Theater song in the style of the show.  Actors maybe be asked to move with the Choreographer.

At the Callbacks – Scene sides will be read, songs from the show will be learned, and a dance callback will be seen.

When disco diva, Deloris Van Cartier, witnesses a murder, she is put in protective custody in the one place the cops are sure she won’t be a found: a convent! Disguised as a nun, she finds herself at odds with both the rigid lifestyle and uptight Mother Superior. Using her unique disco moves and singing talent to inspire the choir, Deloris breathes new life into the church and community but, in doing so, blows her cover. Soon, the gang is giving chase, only to find them up against Deloris and the power of her newly found sisterhood.

NOTE: All roles are singing roles.

All ethnicities are strongly encouraged to audition.  All roles are open to any ethnicity unless indicated in the character description.

Deloris Van Cartier (F – 25-35, Ethnicity: African American, Vocal Range: E3-F#5) An aspiring performer, trying to find both fame and a place in the world. When forced to hide in a convent, she initially refuses to embrace her lifestyle but learns to embrace it when she works with the choir. Loud-mouthed, and sassy, but ultimately caring.

Mother Superior (F – 50-70, All Ethnicities, Vocal Range: D3-E5) The head of the convent, sarcastic and a bit stiff. Extremely protective about keeping her sisters away from the outside world, which puts her in direct opposition to Deloris and her musical teachings.

Sister Mary Robert (F – 16-25, All Ethnicities, Vocal Range: F#3-A5) A postulant, abandoned as a baby and raised at the convent. Shy and soft-spoken but singing with Deloris lets her find her voice. Her wallflower lifestyle has made her live a shell of a life.

Sister Mary Lazarus (F – 50-70, All Ethnicities, Vocal Range: F3-B4) A nun of the convent and the head of the choir. Rather deadpan and the least welcoming of any of the nuns, but she gets caught up in Deloris’s soul music.

Monsignor O’Hara (M – 45-60, All Ethnicities, Vocal Range: G4-E3) One of the heads of the convent. Constantly concerned with financial matters, though soul music surprisingly puts him in a different mood. Speaks with the soulful bass-baritone of Barry White or a late night R&B radio station DJ.

Eddie Souther (M – 25-35,  Ethnicity: African American, Vocal Range: Ab2-B4) The desk chief at the Philadelphia police station and a high school classmate of Deloris who helps get her into hiding. Faces a lot of nerves when under pressure, causing him to sweat profusely. He still yearns for Deloris after all these years, and dreams of being her hero.

TJ (M – 16-30, Ethnicity: African American, Vocal Range: Db3-Eb5) Curtis’s nephew and one of his thugs. Deft and cognizant of the fact, constantly in a state of ignorant bliss.

Sister Mary Martin-of-tours (F– 40-60, All Ethnicities) A Nun of the convent. Clearly in her own world, but has her moments of surprising clarity.

Sister Mary Theresa (F– 60-70, All Ethnicities) A nun of the convent, the oldest of the group. Decrepit at first glance but secretly packs a punch.

Michelle (F– 20-30, All Ethnicities, Vocal Range: Bb3-F5) One of Deloris’s back-up singers. Lippy and always quick with a retort.

Ernie (M – 25-35, All Ethnicities) One of Curtis’s thugs. Initially thought to be a mindless yes-man, he turns out to be an undercover police informant.